Once upon a time in Arcadia in the Year of Our Lord and Other Uncertainties 1880, ladies and gentlemen of adventure in search of tackle by the new makers Hardy Bros. of Alnwick from far away in the Northumbria's would call upon only one company that being 'The Military Equipment Stores and Tortoise Tent Company' of 61 Pall Mall and 7 Waterloo Place London S.W as they alone were the sole agents in all of London for the specialities of Messrs. Hardy.

Today in the Year of Our Lord and Remaining Uncertainties 2013 I am saddened to report it has been well over a century since The Military Equipment Stores and Tortoise Tent Company traded, as their business was swallowed up by Hardy Brothers themselves in the 1890's.  Original tackle from the Northumbria's, by Hardy and other makers is still carried by a small number of agents in London of which I am one.  I can be found on Thursdays only by my stall at Spitalfields Antiques Market on Commercial Street in the district known as E.1, where I trade in memory of The Military Equipment Stores and Tortoise Tent Company and sell Vintage Fishing Tackle for the Soul between the hours of 8am and 3pm. 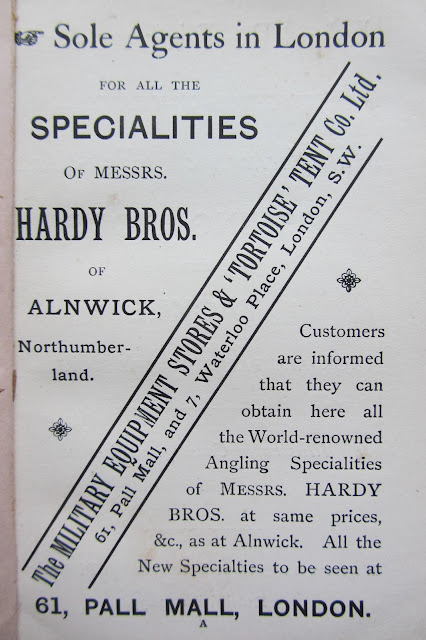