A cold day at Spitalfields yesterday but the shoots of spring evident in everyone's mood and especially in all those who visited the stall including a gentleman from Hackney and a gentleman and his lady wife from Barmouth.  Amongst the treasure that was found when the market opened was an Edgar Sealey split cane Octofloat bearing a transfer for London fishing tackle shop 'Robertsons' of 37 Prince Regent Lane, E13.

The quieter moments of the day were spent reading another purchase, 'Landscape with Solitary Figure', the 1966 autobiography of Colin Willock which not only has an arresting dust jacket illustration by Brian Walker but also devotes almost a whole chapter to a reminiscence of Frank Murgett's 'Maggotorium' at West Drayton, 'Frank Murgett naturally took advice from others in the trade.  Being a thorough man, he studied the problems of maggot raising from all angles.  Then he bought a couple of shambolic huts that had once belonged to the Inland Revenue.  They lay somewhere in the derelict hinterland beyond London Airport.  He obtained a pure strain of giant bluebottles from another maggot breeder, enclosed them in a zinc mesh lazarette where they were to do their stuff, arranged for a steady supply of condemned meat and fish and went to work.  Before long, with only one man and his stud flies to help him, Murgett was turning out maggots at the rate of three hundred gallons a week'. 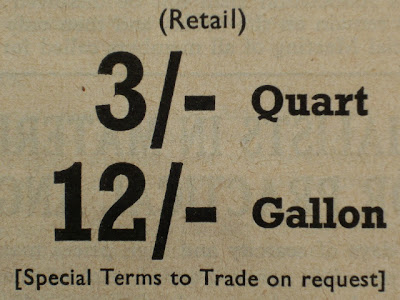