Once upon a time in Arcadia and most notably on a Thursday before the analogue television signal was switched off ladies and gentlemen wanting to view the latest in fishing tackle could take the trolleybus to Fields Fishing Tackle who were situated at 20a Highgate Road in the district of London known as Kentish Town.   There, on certain weeks of the year a television set would be rigged up and tuned to a distant channel being broadcast from the town of Redditch.

Should you wish to watch television in the 21st Century you are welcome to do so but you are advised not to take the trolleybus to Kentish Town nor to any other London districts as the analogue signal was turned off at midnight last night.  However, as an alternative special displays of Vintage Fishing Tackle for the Soul, including original items from the Allcocks Factory may be viewed in 3-D at my stall which appears on a Thursday at Spitalfields Antiques Market between the hours of 07:30 and 15:00. 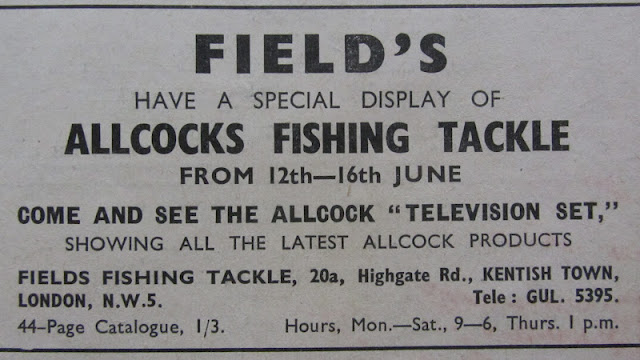