Once upon a time in Arcadia, ladies and gentlemen abroad on the streets of London in the district known as E.1. and in need of fishing tackle would look no further than the door of T.H. Sowerbutts & Son whose premises stood at 151 Commercial Street opposite the match factory.   In the year 1938 Sowerbutts had been 'Noted for a Century' and were 'still in the field'.  Sadly today they are gone having closed their doors to trade in the 1980's.   The paper merchant Mr. Paul Gardner, whose premises still stand next door to the old Sowerbutts shop remembers them well and is always full of reminiscence whenever I call in to replenish my paper bag supply.

Should you be a lady or a gentleman abroad on the streets of London in the district known as E.1. or any other for that matter and in need of fishing tackle you are advised to look no further to my own stall which is open every Thursday selling 'Vintage Fishing Tackle for the Soul' between the hours of 8am and 3pm just a little further south on Commercial Street within the bounds of Spitalfields Antiques Market where  I have been noted for almost a decade and am still very much in the field. 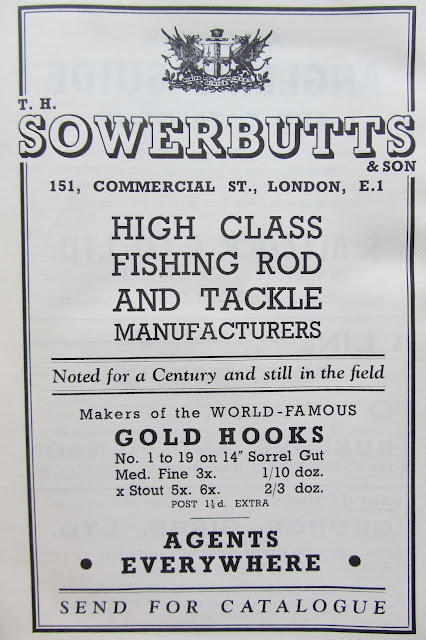