'He Once Had an Otter'

Once upon a time in Arcadia, ladies and gentlemen abroad on the streets of Subtopia and in search of live bait during the winter could ask a professional fisherman to take them to Windsor Bridge where they could call in on Bambridge's which had been established in that spot since the year 1790.  Bambridge's were agents for Allcocks, Hardys and Farlows and was a shop famous beyond its immediate environs, immortalized as it was by Eric Parker in his book 'Eton in the Eighties' (1914 Smith, Elder):

'Bambridge's shop was in those days first revealed in its full meaning.  Other shops had preceded Bambridge's in my experience - in particular "The Golden Perch" in Oxford Street, which then, I think, belonged to Alfred Young - but Bambridge's stood at once on a plane of its own.  It was a shop which could be visited any day or every day; it stocked all tackle of the most desirable descriptions, from dressed salmon lines and split cane trout rods to float caps and shot, and its business was presided over by one of the most patient and cheerful of all practical fishermen.  Bambridge I remember as a short, bustling, rather bald little man with very bright eyes, who seemed always pleased to see the most unprofitable of customers, and explained the virtues of particular rods, reels and landing nets as if they actually belonged to those to whom he showed them.  He would tell you what luck he had on Saturday or Sunday; he gave the fullest directions for using all kinds of tackle, tying different kinds of knots, catching various sorts of fish.  He would instruct you in the selection of the roundest and strongest gut.  He would display to you a batch of a thousand lob-worms from Nottingham, pink and enwreathed in milk and moss.  He once had an otter, which he somehow converted from a wild into a tame creature in a few days;  he kept it in a box at the side of a tank, into which he threw live fish which the otter dived after, caught and ate as we watched it.  Life was always "after twelve" with Bambridge and the Eton High Street surely became a different place when he ceased to preside single-handed over those rods and reels, and when, in after years, B.R Bambridge, fishing tackle maker, became Bambridge and Co. Limited.'

Should you be a lady or a gentleman abroad on the streets on Subtopia or trapped in town by the Impenetrable Outskirts of Pandemonium you are welcome to call at my stall at Spitalfields Antiques Market where every Thursday I sell Vintage Fishing Tackle for the Soul in honour of people like Bambridge.  Life there is between 8am and 3.  I will always tell you what sort of luck I have had on Saturday, Sunday and the other days of the week, and am always delighted to see customers new or returning, unprofitable or otherwise.  Finally, I can promise cardboard boxes full of surprises although live otters will not be among them. 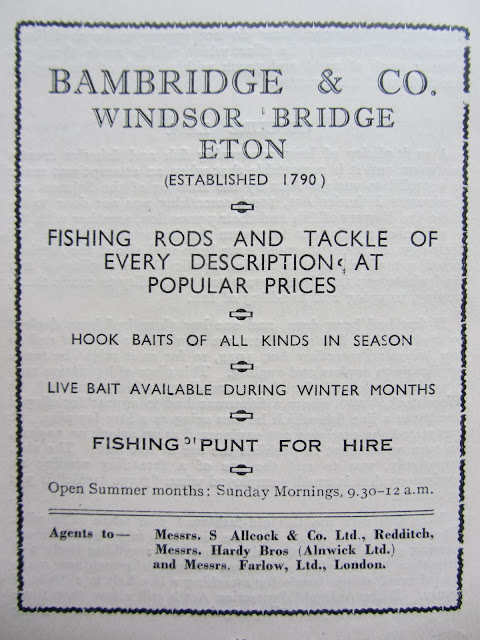