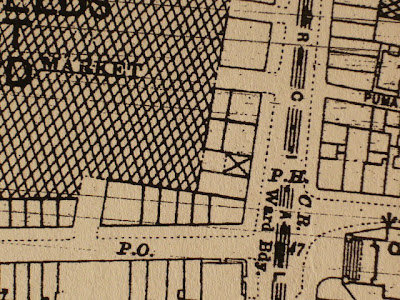 A most convivial day at the stall yesterday with visits by many friends of Arcadia including an old collaborator from the Great Music Business War of 1993-1999 the illustrator Pete Fowler http://monsterism.net/blog who was working on an illustration in his new series for www.caughtbytheriver.net/ 'Piscator and Fitch'.  Chewing the fat with the man who can find anything on You Tube, Jonny Trunk http://www.trunkrecords.com/, the talk was of a suitable accompanying soundtrack, the mild weather and of how the day would have been better spent fishing.  A man who knew all about a soundtrack and of how a day would always have been better spent fishing was 'Out of Town's' Jack Hargreaves.  In this film you will see him doing just that and also catch a glimpse of his original Efgeeco Canvas Bait Bucket and Northerner's Maggot Bag http://www.youtube.com/watch?v=7kl-Tw5DNvA&feature=related.
Newer Post Older Post Home